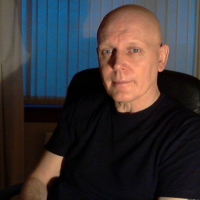 She was home, alone, as usual for during the day. Her c***dren were at school. Her husband was at work. She spent the day working on housework, but today she was edgy. She was overly sensitive to everything today. She wished someone was there to talk to, someone to touch her, to help her work out her raw needs she was experiencing that day.

She decided a distraction was needed, so she turned on her PC and started looking at her boards. She heard the jingle of her messenger as a little window popped up. She smiled.

There are no substitutes for you

there is only one you

Just seeing those simple words, weather they were true or not, made her heart leap with joy. She tried to respond to it, but never heard anything back.

Thinking of her secret romance she smiled, it made her feel alive, young, energetic. She thought back of the times they had together and felt her pulse start to race, her nipples became erect and she couldn't bare not to touch them. She slowly caressed her self over her clothing, the friction of the material over her skin made her want to shed it all. She was feeling the pressure in her start to grow, and she wanted to be naughty.

She moved around the room a little, set it up so that it was ready, she brought in her small Tupperware box of assorted toys and turned the camera on. The request came immediately. She knew he enjoyed to watch. This time though. No words.

She positioned the camera so he could see where she stood, Still fully clothed. She turned on some music and started to slowly sway in time, focusing on watching her self on the screen, knowing he was watching her, waiting, wanting, lusting.

She slowly began to unbutton her shirt, her body was aching to be unencumbered, but she took her time, savoring the tingling of the cool air on her warming, flushed skin. She removed the shirt and tossed it to the floor. She turned around and shimmied from her black leggings, bending over, feeling the thong she wore underneath as it rode tighter between the crevice of her ass, and feeling it softly caressed her clit, like her imaginary lover's fingers would. She immediately became wet and was longing to be touched, but she decided to torture herself longer, letting the urge build more strongly. Still with her back to the camera she slowly slipped the straps off her bra down her arms and undid the latch at her back, then slowly turned to the front and allowed the bra to slide down to reveal her breasts. She then allowed the useless piece of fabric to fall to the ground. She gently started to tease her nipples, squeezing slightly, reveling in their tenderness. She lifted one breast up and licked it with her tongue, making it glisten. The sensation of her own tongue caused a shiver with excitement. The throbbing between her legs increased.

She reached down and tugged her satin panties up, allowing the thin line of fabric to rub harder against her clit, enjoying the sensation as the fabric started to stick and tug as it started to get soaked in her juices. Unable to bear it any more she ripped them off her as fast as she could and while pinching a nipple with one hand, she rolled the source of her need between the fingers of her other hand. Her fingers becoming moist, she felt the heat calling to her as she slowly thrust her fingers into herself, feeling the silky smoothness of those hot walls as they contracted against her. She sighed in pleasure, but it wasn't enough, she needed more. She removed her fingers from inside her and licked her own juices off her fingers, her center still throbbing with need and want. She brought out a silver bullet and turned on the buzzing vibrator, she placed it between her legs and growled with it, the sensation of it causing more waves of pleasure, She positioned herself of the camera so he could see her deepest most secrets. So he could see her reaction to the thought of having him there, fucking her hard, causing all this passion and want and need.

Her pussy was wet and pink as she bruised herself slipping her fingers inside of her, spreading her lips and wishing his tongue was caressing her, wanting to feel his hot breath on her, his teeth tugging at her clit and causing all this pleasure.

Still she needed more. She needed his hard cock inside her, she needed to feel the thickness of it, the pressure of it. Then she glanced over and saw it...

She stood up and walked out of sight of the camera. She wondered if he was enjoying the show and if he would enjoy her new idea.

She lay the vacuum cleaner on the ground, and positioned the camera so he could watch as she started to caressed the handle, imagining it was his cock growing hard in her hands. Licking the tip of it and showing him how she would love to pleasure him with her crafty tongue., she then positioned herself over the handle and slowly lowered herself onto it. Her eyes grew wide and glazed over as she immediately shattered from the impact of it, imagining it was him she was riding. She started to move herself up and down slowly, sliding up and down causing the handle to enter her deeper, imagining it was him, the sensation growing and wanting even more of him.

She started to pump herself up and down slipping and sliding over the handle in a frenzied attempt to quench her need, her thirst, trying to achieve that release. She then picked up her vibrator and placed it on her clit as she squeezed herself over the hard plastic, her imagined lover's cock, she gasped at it, and then felt the volcano build inside her. She could feel him under her, feel him pounding into her, feel his heart beat as fast as hers. She tossed her head back and closed her eyes, feeling him, his hands on her body, stroking her flesh, grabbing her breasts, sliding in and out of her. She felt the dam break and she came in a gush, her juices sprayed out of her hard and fast as she felt release, she removed herself from the glistening handle, as her juices dripped down her thigh and sweat dripped down her neck. She stood there glistening, sated, released.

She touched her sore and well used pussy. Stroked it lovingly, soothing it. Bringing her essence to her lips, and tasting herself again. She blew a kiss to the camera and shut it off, retrieved her clothes and continued doing her house hold chores....giving a longing look to the washer as it started to vibrate and rattle because of the unbalanced load.
Posted in Writing on March 26 2021 at 09:37 AM
Like
share Share
1 0 0 0 0 0 0 0 0 1
Comments (0)
arrow_forward arrow_back
The Naked Social Network is only available to users 18 and over and we use cookies
We use cookies for functionality, social media, and google analytics. To view our cookie policy please click the read more button.
Read more east Accept done Deny remove